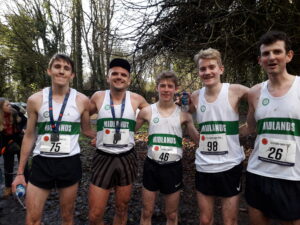 After a couple of weeks of strong wind and very heavy rain it was a relief when Sunday 12th December 2021 was dry with a slight breeze. Race Director Dave Mansbridge and his organising team from Telford staged three great races with the faster men in Race One. As usual it was a competitive race from the start with the first mile predominantly downhill. There were Midland athletes to the fore throughout with Jack Gray (Cambridge & Coleridge) well up early on but dropping off slightly in the second half. The pace was relentless throughout with Matt Clowes coming through in the second half to be in the mix in the dash for the line; and what a dash it was with Alfie Manthorpe of City of Sheffield just getting the verdict from Lucian Allison of Lincoln Wellington in 29:08 (29:06 chip timed). Matt Clowes was third in 29:09 (29:08 chip timed).
Behind Matt, Sam Moakes (Sutton-in-Ashfield finished fourteenth in 29:38 (chip-timed) and Alastair Watson (Notts AC) twenty-first in 29:50. George Beardmore (Worcester AC) finished twenty-fourth and was delighted to run under 30 minutes for the first time with a 29:56 (chip-timed). Close behind Jack Millar (Bristol & West AC) finished twenty-seventh and again ran sub 30-minutes for the first time as he clocked 29:58 (chip-timed) as he led a competitive Development Team home in third place in the Inter-Area match. Jack Gray finished thirty-second in 30:12 after a fast first lap. Dominic Priest (Leamington Cycling & AC) finished thirty-ninth in 30:25, Dan Connolly (Telford AC) finished forty-ninth in 30:37, Kristian Watson (Mansfield Harriers) seventy-ninth (and sixth V35) in 31:23 and Tom Mahon eighty-seventh in 31:32.
The Midland Counties with three to score in the Inter-Area team event scored just seven points (after non-Area runners had been excluded) with Northern Counties the runners-up on 20 points. However, it could have been a different story had the first two finishers been part of the northern squad (they would have won by 8 points to 13!). A great decision by Team Management to field a Midland Development Team gave five athletes a chance to wear the white and green chest band of the Midlands in the race with Team Captain Jack Millar clocking sub 30-minutes for the first time and leading the team to a fine third place ahead of the UK Armed Forces and North Wales.
The Ladies result will follow.